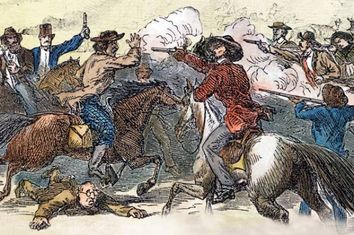 Robert K. Sutton retired as Chief Historian of the National Park Service in 2016, after having served in the position for nearly nine years. He came to this position following his tenure as the Superintendent of Manassas National Battlefield Park for the previous 12 ½ years. From 1986 to 1990, he directed the Historic Preservation and Historical Administration public history programs at Arizona State University. He has published a number of books, articles and reviews on various public history topics.
A town at the center of the United States becomes the site of an ongoing struggle for freedom and equality.
In May, 1854, Massachusetts was in an uproar. A judge, bound by the Fugitive Slave Law of 1850, had just ordered a young African American man who had escaped from slavery in Virginia and settled in Boston to be returned to bondage in the South. An estimated fifty thousand citizens rioted in protest. Observing the scene was Amos Adams Lawrence, a wealthy Bostonian, who “waked up a stark mad Abolitionist.” As quickly as Lawrence waked up, he combined his fortune and his energy with others to create the New England Emigrant Aid Company to encourage abolitionists to emigrate to Kansas to ensure that it would be a free state.
The town that came to bear Lawrence’s name became the battleground for the soul of America, with abolitionists battling pro-slavery Missourians who were determined to make Kansas a slave state. The onset of the Civil War only escalated the violence, leading to the infamous raid of William Clarke Quantrill when he led a band of vicious Confederates (including Frank James, whose brother Jesse would soon join them) into town and killed two hundred men and boys.
Stark Mad Abolitionists shows how John Brown, Reverend Henry Ward Beecher, Sam Houston, and Abraham Lincoln all figure into the story of Lawrence and “Bleeding Kansas.” The story of Amos Lawrence’s eponymous town is part of a bigger story of people who were willing to risk their lives and their fortunes in the ongoing struggle for freedom and equality.
Place: Drusilla Seafood http://drusillaplace.com/r/
Cost: $30.00 per person includes food, fun, tax, and tip.
Registration: Doors open 6:30pm and the evening begins at 7pm.
Reservations: contact John Potts (225) 937-2782 or brcwrt@att.net
Please Reserve a Seat by noon Tuesday October 1 to insure proper seating. Late reservations are welcomed. Seating is limited, so call now!
Book Raffle: $1 per ticket or 6 tickets for $5.
Facebook page: Articles, videos, and photographs. Search for - Baton Rouge Civil War Round Table