Burny Myrick
​Framed Original
Pen and Watercolor
Tickets for Burny Myrick artwork raffle
1 for $15,  2 for $25
Tickets available at the event.​

"The Rebel Scout"
From "The North and South" book that wasn't completed at the time of his death. This artwork gives one a sense of loneliness and danger of scouting.
No prints have made of this artwork
​
Donated from the Gerard and Selma Ruth Collection
Valued at $2,500.00 to $3000,00

Examples of Burny Myrick's work below.
​He was selected from over 300 artist to be the artist for the
New Orleans World's Fair.
The painting pictures were taken  over 10 years ago. 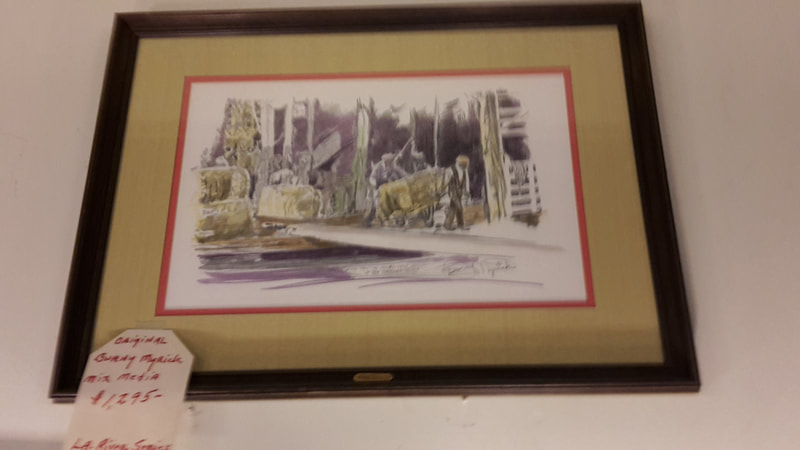 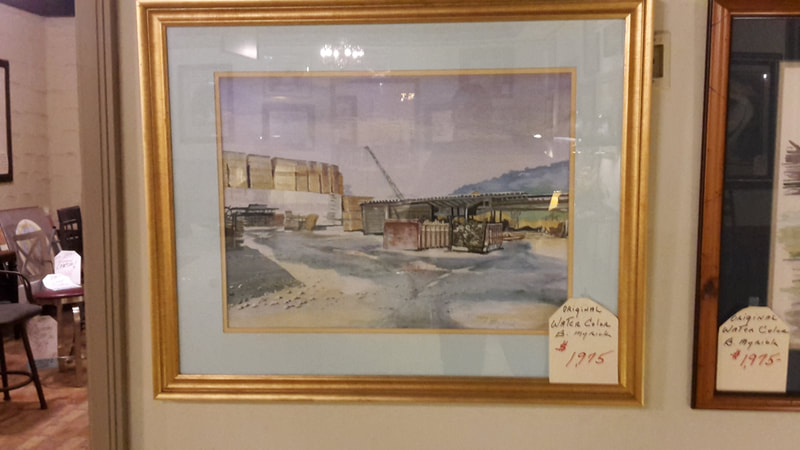 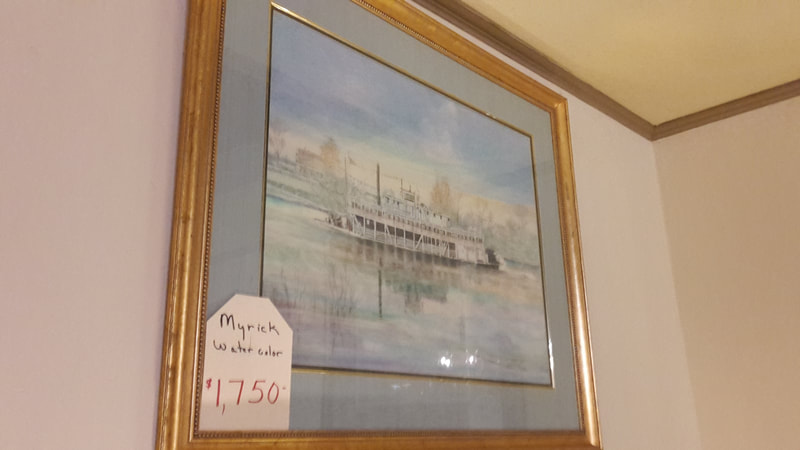 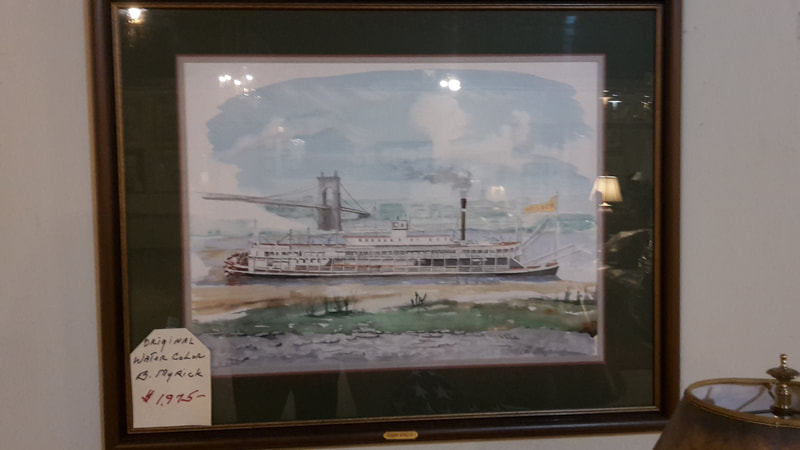 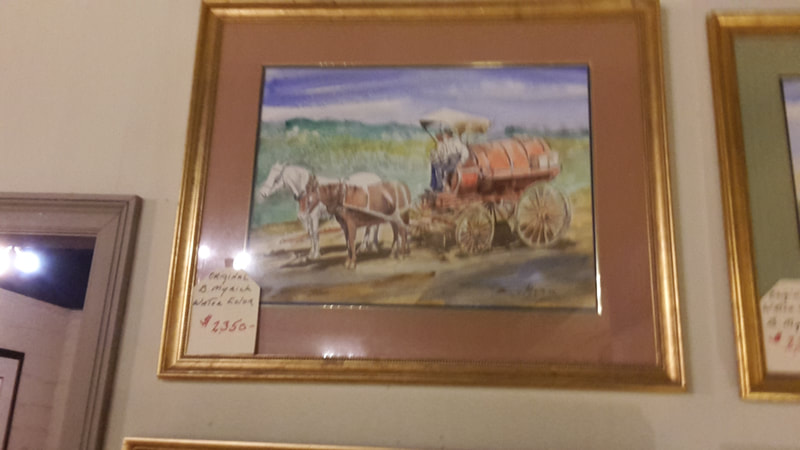 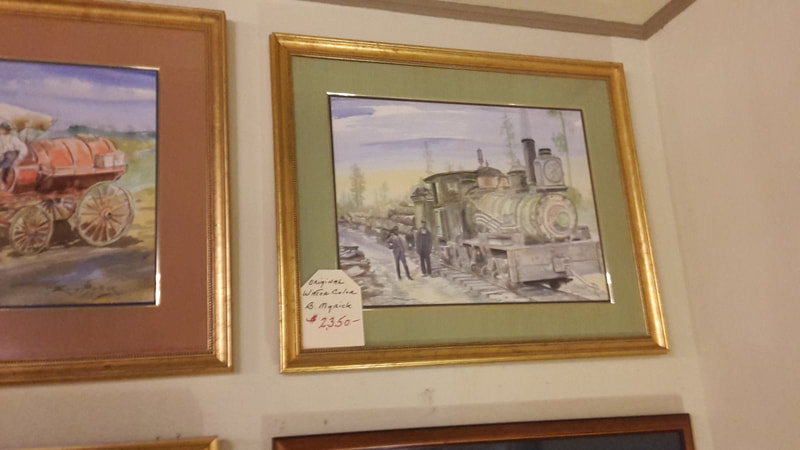 Burny Myrick, who spent more than two decades painting portraits in relative anonymity, has suddenly found a much wider audience for his paintings of the Mississippi River.
At unexpected bends along the mighty waterway, the world is reduced to essentials -- river and sky.
'To walk on the levee is to open up the space, to feel I'm part of more than just my little environment,' said Myrick. 'When I stand in front of one of my paintings, I get the same feeling of space. Can't you see why I love it?'
"In a very real sense I paint not only the river that was but the river that always will be."
A greeting card company is publishing his paintings of the Mississippi. Oxmoor House has brought out the series in gift book form.
"The Timeless River," published by the book division of Southern Living magazine, is a large volume, rich in color reproductions of Myrick's paintings and studies. They depict life on the Mississippi from 1850 to 1900.
"Someone suggested I go to the Southern Living offices to see if they wanted to buy any of my drawings to go in their building," he said. "After they saw my drawings and transparencies, they decided to do a book."
Before the publication of 'The Timeless River,' Myrick, was best known as a portrait artist. For more than 20 years he labored at commissions from attorneys, executives and scholars. Any visit to his French Quarter studio turned up two or three works in progress.
He concentrated on his long-term project depicting commerce along the Mississippi.
Myrick, who was born in Mississippi, would like to create works that appeal to both North and South, but he discovered -- especially when dealing with the Civil War -- that it was a near impossible endeavor.
"I plan to do a painting of river life during the war,' he said. "So I called historian T. Harry Williams and asked him for something both sides would appreciate. He said forget it. You have to take sides."
"But I'm sure I'll come up with something. Blockade running, for instance, would be a colorful subject."
Although the most striking first impression of the river paintings is the wealth of minute detail, the works' most memorable qualities are their rich-hued skies -- a throwback to Myrick's World War II experience.
"I studied meteorology while training as a navigator in the Army Air Corps," he said. 'It was during this time that I learned about clouds. You know, what causes this or that, and what combinations occur in nature. You can tell I'm not just making it up.'
Myrick's dedication to painting is matched only by his affection for his favorite subject.
"I used to leave my gallery to fly, to see the land so wide open," he said. "Now that I can walk along the levee, I no longer get the urge to fly."
"'From the levee, space is everything under the special Southern skies, with colors and cloud formations you'll find nowhere else. Painting these scenes is more than illustration. There's emotion in these shapes and colors."